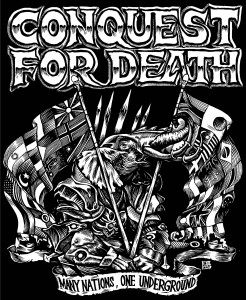 Many Nations, One Underground is the manifesto, for lack of a better word, that Conquest for Death adheres to. Our members reside on three continents and three different geographic regions of the United States but do not let this hinder touring and recording. We’ve all been listening to and collecting hardcore, punk, thrash, metal, garage and other forms of loud, raw music for years, and despite the differences in style, feel that they are all part of one large family. We’ll play a basement show to a room full of punks or a festival to a mass of metal heads and approach them both with the same attitude and energy. Our music is an extension of our long time friendships as well as a vehicle to express anger and emotion, travel, see new places, meet new people and try new foods. The music is the common denominator we share with the bands and people we meet. From these friendships we are able to build platforms to learn about the lifestyles, histories, politics, religions, flora, fauna, and cuisines of regions and countries outside of our own. The lyrics to one Conquest for Death song state, “Metal taught me history, punk taught me geography” and these words are totally true. Playing in a touring, underground DIY hardcore punk band has taught us volumes about ourselves and the world we live in.

Formed in early 2006, Conquest for Death have released three albums “Front Row Tickets to Armageddon,” “Beyond the Hidden Valley” and “Many Nations, One Underground” and have toured throughout the United States, Japan, Africa and Australasia.

Conquest for Death are: